We have grown very used to investment markets continually rising. From the depths of the Global Financial Crisis (GFC) in March of 2009, we have seen a steady increase in asset values for a period of more than 10 years, and it is this which is extraordinary. Normal market conditions would suggest a major correction to the upward march every seven years or so. People are even starting to whisper the “R” word (Recession – Shhhh!). In Australia, this of itself is extraordinary.

A technical recession is defined as two consecutive quarters of negative GDP movement (sorry, I can’t bring myself to talk about negative growth). In Australia, we have not had a technical recession since the early 90s, even during the GFC. By contrast, the US has had several, one in the 90s, one around the time of the dot com bubble burst in 2000, one around the time of the September 11 attacks, they even refer to what we call the GFC as “The Great Recession”.None of these things are unusual, markets cannot continually rise, and we are not only talking about the market for shares here, the same is true for markets for property, markets for commodities, markets for currencies.

Who would have thought for example that we would again see times when Crude Oil would sell for $20 US a barrel, when we have seen it as high as $130 or more. Who would have thought that the exchange rate between the Australian Dollar and the US Dollar would be less than 50 cents (not this time but when I travelled to the US in 2000) or more than $1.10 (when I again travelled to the US in 2011). My daughter bought petrol last week in Sydney at $0.95 per litre, the lowest price she has ever seen in her more than 13 years of driving.The thing is that when we are investing for the long term (as we all should be), events which appear catastrophic today become mere blips with the passage of time. As part of my ongoing research I came across the following chart (All credit goes to Morningstar). 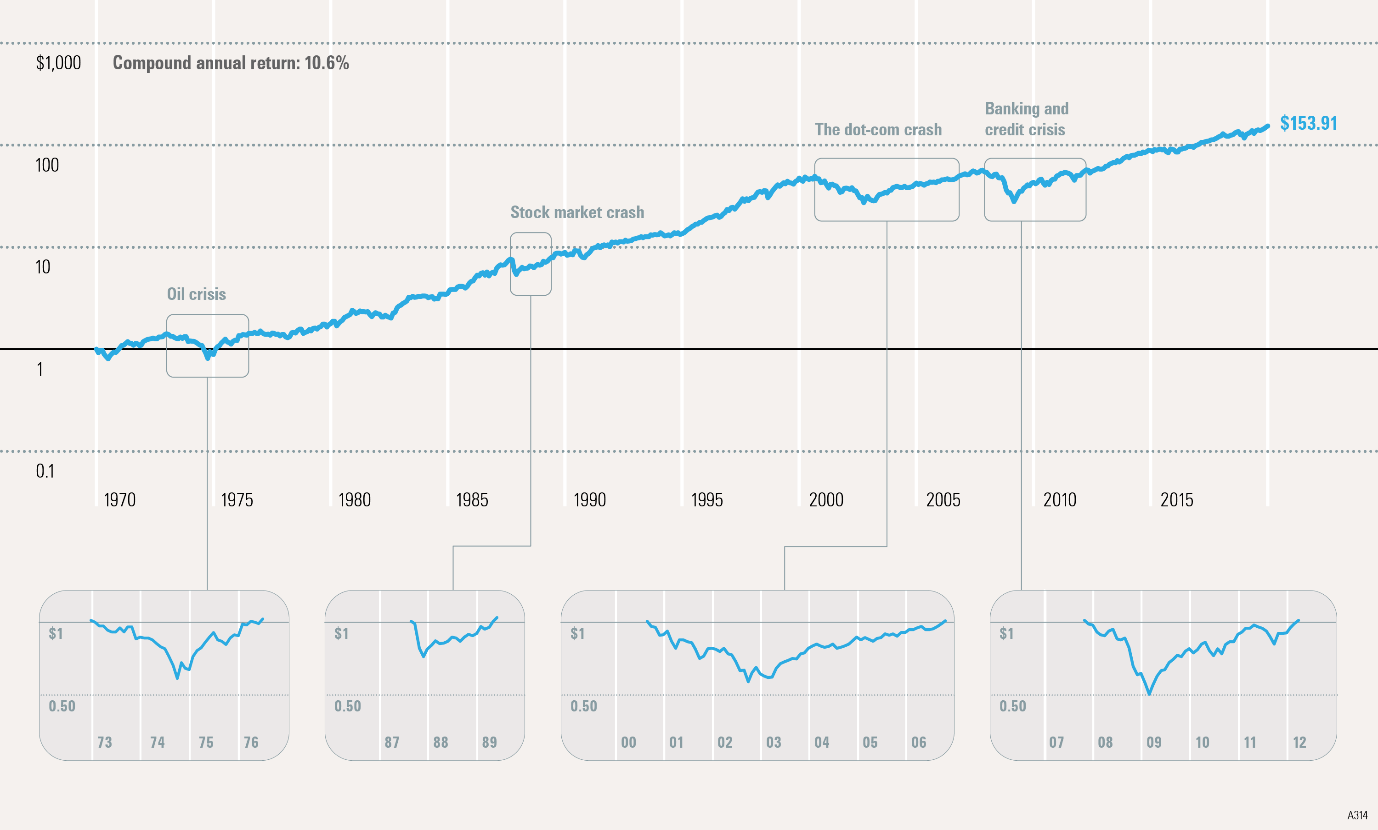 I was around for the 1987 Stock Market Crash, I have previously written about my experiences here. The dot-com crash was hardly felt at all in Australia (probably because we didn’t and still don’t have much of a dot-com industry.), but its effects were felt as the US government put in counter-measure which had the effect of sky rocketing the value of the US Dollar.

THE GFC or Great Recession (referred to in the above chart as the Banking and Credit Crisis) in the US was a trying time for investors in Australia, but didn’t have much of an effect on the wider economy here, as we were in the middle of a resources boom and were insulated from the global down turn due to our trade relationship with China.

This time around it is likely that we will experience a technical recession, it could be hardly otherwise given lockdowns, forced business closures and restrictions on travel. It will end though (I have no idea when), the virus will be contained, businesses will re-open, profits will be generated (some from new enterprises, some from old) and markets will begin their upward march.>

What will cause investment markets to fall next time (this one is a bit unusual – a medical emergency) is anyone’s guess. It could be an alien invasion, zombie apocalypse, the beating of a cicada’s wing in Uganda, or the normal cyclical expansion and contraction of the global economy. The key is to stay focused and not panic, it will all be OK in the end. Above all, don’t forget investment markets can fall.

More on markets in coming days.

The views expressed in this article are my own and have no official standing whatever to the living or the dead. If you like this article why not share it? I appreciate your support. Be sure to visit our blog again for this and other articles. If you have any thoughts, comments are always welcome! Why not connect with me on Social Media so we can continue the conversation.

Innovus Advice Solutions is a Corporate Authorised Representative (Number 1007263 of Professional Investment Services Pty Ltd ABN 11 074 608 558 AFS Licence No. 234951 The information on this website is provided as general and factual information and should not be regarded as personal advice. To provide personal advice we need to take into consideration your own personal financial position and goals and provide appropriate advice accordingly. If you would like specific personal advice for your circumstances, please contact us or any other financial planner, financial adviser or any other financial professional. www.profinvest.com.au info@profinvest.com.au PIS Head Office Telephone: (07) 5574 0244 PIS Financial Services Guide and Privacy Policy PIS Complaints Process

GET A DOSE OF THE WRIGHT STUFF

Insights, events, blog posts or anything you might need to know and no spam ever..